Large international development projects do not always meet the environmental and social standards technically required of them by funders such as the World Bank, especially when it is unclear who has responsibility for following up on commitments. A new study published this month explores the problem for a large hydropower project. The study was carried out by Nafeesa Esmail of Wild Business Ltd, as part of a project led by the University of Oxford, UK, which is examining the social and ecological impacts of two dams and an associated biodiversity offset near Jinja in Uganda.

Financial organizations such as the World Bank fund numerous large international development projects, so long as they meet strict social and environmental performance standards. But who ensures that projects eventually deliver upon these standards? By ‘following the money’ into enormous hydropower projects in Uganda, Esmail finds that organizational roles are so opaque, and responsibilities so diluted, that standards can fall by the wayside once shovels are in the ground. This is particularly the case when the interests of subsequent projects conflict with the agreed standards of existing projects.

The Bujagali dam was constructed in the late 2000s, co-financed by the World Bank, in part to improve electricity provision for the Ugandan people. But given the environmental damage likely to be caused by the construction of the dam, the project was required to create and improve nature conservation areas nearby as compensation, and even relocate spirits in line with the traditional beliefs of people living nearby, through a project called the Kalagala Offset. The Government of Uganda, the ultimate proprietor (once fully operational, investor loans paid off and shares relinquished) was guaranteed to fulfill these obligations through an International Development Association Indemnity Agreement. However, as of 2017, though the Bujagali dam has been built, there has been only patchy implementation of Kalagala Offset activities. Furthermore, these areas are now under threat from an additional hydropower project, the Isimba dam, currently under construction. Since it is not funded by the same international lenders, Isimba is not required to meet the high standards agreed to for the Bujagali project.

The analysis reveals limited coordination and communication between governmental entities and other key players, which undermines the implementation of actions required to meet environmental and social standards. Whilst this stems partly from fundamentally weak institutional capacity at both national and local administrative levels, the situation is not improved by the lack of follow-up from those who have set the standards in the first place. Ambiguities in terms of responsibilities and ownership means standards are not always met, often at the expense of biodiversity and local community wellbeing. 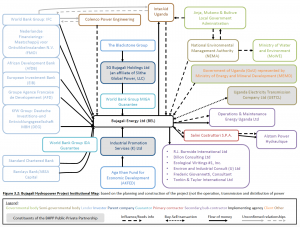 Crucially, the report exemplifies the huge complexity associated with implementing biodiversity offsets in practice, for large international development projects. Biodiversity offsets have generated controversy in many countries, amongst those who doubt their effectiveness or even deem offsetting to be unethical. Biodiversity offsetting could feasibly be used, alongside other measures, to decouple economic development and impacts upon nature. However, this report demonstrates very clearly the difficulties of doing so in practice, particularly when a large number of different actors are involved as this can create complex stakeholder and institutional structures, requiring even more attention to due diligence by all involved parties. Biodiversity offsetting will only work if public and private actors act in unison, and if responsible agencies monitor implementation. The Kalagala Offset is a clear example of why roles and responsibilities (including financial responsibilities) need to be clearly outlined from the outset, as well as why it is important that recourse in the case of infringement is built into the original agreement.